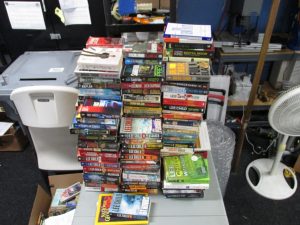 iSOLD It is dedicated to honoring the services of U.S. Armed Forces active duty military and veterans. Across the national franchise network, they form a key component of the iSOLD It family.

As part of its commitment to honoring active duty military and veterans, iSOLD It launched the second annual Share Your Story campaign. The campaign, a partnership with Operation Paperback, encouraged donations of gently used paperbacks at select iSOLD It locations. The books, collected from local community members and businesses, were then donated to active troops, military families and veterans in need.

Scott Brown, who owns iSOLD It in Fullerton, California, was delighted to do his part for the campaign. “I really appreciate the opportunity to give back to veterans in any way, large or small, and iSOLD It makes it easy through the Share Your Story campaign,” he said. “It’s especially rewarding to see the community rally to the cause and make donations to deliver a dose of cheer to all around the world.”

Veterans form a vital part of the iSOLD It franchise network and qualified veterans can take advantage of a 25 percent discount in franchise fees upon signing to get started. The iSOLD It franchise model, which rewards integrity and hard work, is a perfect fit for veterans who are looking to return to civilian life and use their hard work ethic to launch their own business venture as part of a trusted franchise.